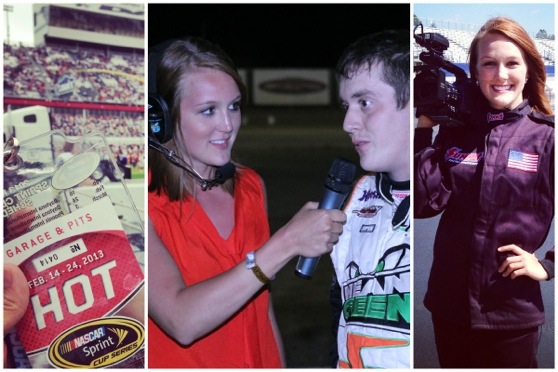 Speedweeks. It’s a term usually used to describe the events staged at Daytona International Speedway to rev up for the Daytona 500. For two years now, I have covered these few weeks of racing in February for ESPN Radio Ocala/Gainesville.

This year, however, my Speedweeks got a little extra speed.

Between trips to Daytona, I spent the last weekend in February pit reporting for the Amsoil USAC National Sprint Car season opener at Ocala’s Bubba Raceway Park. Three nights of non-winged sprint cars, two days of the Gen-6 Sprint Cup car in action, and one international headline-making Nationwide race later, I experienced the most thrilling, speed-filled week of my career.

But when everyone else was calling Speedweeks a wrap, I still had a few miles-per-hour to add to the adventure – 143 to be exact. Thursday after the Daytona 500, I had the chance to go for a 143mph, 9.43 second ride in a Super Gasser at Gainesville’s Auto Plus Raceway as part of a WUFT-TV feature story on Frank Hawley’s Drag Racing School.

My “speed weeks” gave me a completely new perspective on speed and what it takes to get there.

Learning in the Dirt

While most of the attention in the motorsports world was focused upon the big names of NASCAR at the World Center of Racing, the action was alive in a more secluded corner of the state as well. Off the beaten path in northwestern Ocala stands Bubba Raceway Park, the site of the Amsoil USAC National Sprint Car season opener.

I was the pit reporter for the weekend, and it was a mixture of the familiar and the unfamiliar for me. The track is in my hometown, but non-winged sprints and dirt racing is a whole new world. Thankfully for me, there was no shortage of people from far off eager to help me understand the intricacies of the racing they know and love. Drivers from Indiana to California and fans from as far away as Canada made the trip to quiet Marion County for the weekend of dirt track drama.

Oddly enough, the fact that the Daytona 500 takes the racing spotlight on their opening weekend does not seem to bother them. The miles the participants and fans traveled spoke that loud enough. But it was the passion of the fans, drivers, and staff for this kind of speed that really struck me. Kirk Spridgeon, USAC’s Circle Track Advisor, said the power these cars carry along with their lack of downforce is what keeps the drivers – and the fans – on edge. “It’s not as glamorous, but it’s pure,” he said.

Witnessing this “less glamorous” side of racing where drivers like Tony Stewart, Ricky Stenhouse, Jr., and Kyle Larson cut their teeth opened my eyes to a small picture of what it takes to make it to the “big leagues.” Drivers as young as 17 competed with seasoned veterans, many a part of home-grown, minimum budget race teams, yet not an ounce of their grit and determination to succeed on the race track was affected. It was an honor to learn about the racing that is their livelihood and join them in Victory Lane for interviews when their hard work paid off.

After seeing the excitement of the dirt track racing in Ocala on Friday night, Saturday’s Nationwide race was that much more fantastic. In fact, it was the most exciting racing at the superspeedway all weekend long. Unfortunately, the great racing in 119 laps of the race was marred by a massive wreck in the last lap that injured 28 fans.

But before his car catapulted into the catch fence, my attention was caught by 20 year-old Kyle Larson. The staff at USAC had spoken highly of his skills in their series and beyond, and I was eager to see him in action.

His first career Nationwide start was nothing short of impressive. He charged through the pack, held his own at the front, and even led some laps with tandem help from another young driver, Parker Kligerman. Seeing that raw talent and the potential it holds represents all that is exciting about the Nationwide series.

Everyone loves to say they were fans of a band before they started playing them on the radio. It is the same with finding drivers you love in NASCAR’s “minor leagues.” Though it is considered a “big break” for a driver to make it into the Nationwide series, it is always fun to say you cheered for a driver before he made his (or her) big break into the Cup series. I cannot wait to see what becomes of the young talent like Larson, Kligerman, Trevor Bayne, and Austin Dillon in the Nationwide series this year.

After rushing from the wreck to wrapping up a final night of USAC racing on Saturday, I was headed back to the beach again. On the morning of the biggest race of the NASCAR season, I had the opportunity to witness the pre-race excitement with an inside look. Armed with a hot pass thanks to my friends at ESPN, I hit the pits in hopes of soaking in as much as possible from the site of the historical race.

The highlight of my race day came on the set of the aptly-named show on SPEED Channel. SPEED Contributor Matt Clark kindly invited me to sit in on set as he and his fellow broadcasters John Roberts, Kyle Petty, Kenny Wallace, and Larry McReynolds made “Raceday” TV happen.

We chatted before the show about what it takes to prepare live TV analysis. It was fascinating to see them put it all together flawlessly in front of the camera while battling time constraints and script changes that were invisible to the audience.

What struck me most, however, was how consistent their on-air personalities were with the personalities I saw after the show and on commercial breaks. It was an encouraging lesson on how it is okay – even necessary! – to be yourself when the red light comes on. As a broadcaster, it is tempting to think you have to be a more refined, perfected version of yourself on-camera. But this mindset often has the opposite effect and leads to a stiff, robotic, talking head on the TV screen. Witnessing the SPEED guys in action showed me that it is the quirkiness and uniqueness of someone’s personality that makes them enjoyable to watch on television. As my dad has taught me for years, you’ll always be successful when you enjoy what you do.

Drag Racing from a New Perspective

As if the weekend’s events were not enough to make my already huge heart for racing bubble over with love, the following week I had the opportunity to experience racing like I never had before. NHRA’s Gatornationals event is soon approaching, and in an attempt to help our viewers understand more about the culture of drag racing, I had the chance to film a feature on Gainesville’s own drag racing school for WUFT-TV.

The highlight of this feature on Frank Hawley’s Drag Racing School was unlike any feature I’ve done before. Instead of a typical 12-second on-camera standup, this piece had me reeling down the dragstrip riding shotgun on a 9-second run.

“Exhilarating” does not begin to do it justice. I am sure my jaw dropped open beneath my helmet as the super gas car roared to the finish and left my stomach at the start line. I did not expect the jolt of horsepower to hit me so quickly, but it did and the adrenaline rush that followed was unforgettable.

I cannot thank Frank Hawley and his crew enough for so graciously walking me through the steps it takes to take a drag racing course. My run topped out at about 143mph, and I cannot imagine what it must be like to run over 300mph on that strip (or 200mph for 500 miles around a superspeedway!) Being strapped into the seat with my life at the will of the driver and the car made real the dangers of racing of any kind – but it also gave me a taste of the thrills.

After this week, it is all I can do to keep myself in the pits doing interviews rather than strapping into a car and putting the pedal to the medal on the track. Although I missed the boat on becoming the next Danica Patrick, my appetite for speed has grown exponentially this weekend. Between my refreshing look at the purity of dirt track racing, eye-witness account of making SPEED TV magic, and wild 9-second ride, I am more passionate about racing now than ever before.

My Speedweeks certainly gave me a new taste for racing, and I’m not sure my huger for it will ever be quenched. And I am completely okay with that.

Bring on the speed.