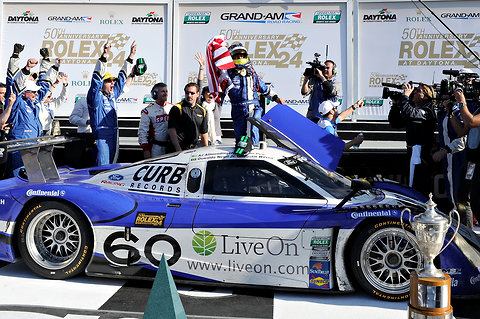 Leading up to the day-long race at Daytona International Speedway, the new Corvette Daytona Prototype was all the buzz. The model, unveiled in November, put Chevy back in the Rolex for the first time in 11 years. It was praised for its good looks, but in the two-times-around-the-clock at Florida, beauty fell short.

In the end, it was the beast that was Ford who took home the Rolex watch on Sunday – as well as the 2nd and 3rd place finishes. Michael Shank Racing took the overall title in the No. 60 car with drivers Oswaldo Negri, John Pew, NASCAR’s AJ Allmedinger and IndyCar’s Justin Wilson, finishing with a near-record 761 laps under their belts. In the GT Class, the No. 44 Magnus Racing Porsche, whose team included 2011 NASCAR Rookie of the Year and 4-time Rolex champ Andy Lally, along with Richard Lietz, Rene Rast, and team owner John Potter. Porsche followed Ford in claiming all 3 top spots in their class as well.

The sweep was a big accomplishment for Ford, considering it had been 13 years since its engines last appeared in Victory Lane at the Rolex. And for team owner Michael Shank, it was a first.

Shank has run in the GRAND-AM’s premier race without a podium finish for the past 7 straight years. “This is for Shank,” final stint driver Allmedinger said as he emerged from the car after the race. “We all wanted to win it so bad, but I think more than anything, we wanted to win it for Mike Shank cause he works harder than anybody I’ve ever met.”

There was certainly hard work to be done to earn the victory. Driver Justin Wilson broke his back 6 months prior in the IndyCar race at Mid-Ohio – and the Rolex was his first race back after the injury. The competition brought interesting hurdles as well, the most memorable being the paint-trading fight for first place between Shank’s No. 60 and Starworks Motorsports’ No. 8 with 3 hours to go. The No. 60 also overtook defending champions Chip Ganassi Racing who ended up 6th after a late race pit stop resulted in lost time and a penalty for speeding on Pit Road.

The highly anticipated Corvettes however, barely posed a problem for the competition, instead seeming to be more of a problem for the 5 teams driving them. The No. 5 Action Express Racing Corvette DP faced setbacks within the first lap, but ended up finishing best out of the Chevrolet DPs with 5th place. The No. 99 GAINSCO and the No. 10 SunTrust Racing Cars did not fare so well, finishing next-to-last and last respectively in the DP Class. The No. 99, notably driven by Alex Gurney (son of the first-ever 24 Hours at Daytona champ Dan Gurney), held its own in the top of the pack until a severe overnight delay in the garage left it 89 laps down. The SunTrust Racing car completed only 25 minutes of the 24-hour competition before engine failure forced the team to retire from the race, calling it a “tough, tough day” from their twitter account.

The GRAND-AM Rolex Series drama will continue with the Porsche 250 in March. Meanwhile, Daytona International Speedway will turn its attention to NASCAR.